Earl Palmer – From Blues to Rock & Roll and Beyond (Part II) 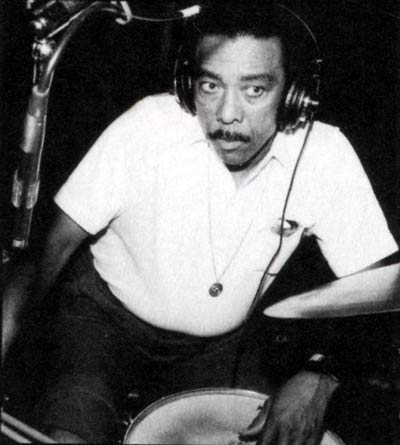 Recorded in 1949, “The Fat Man”by Fats Domino is one of Palmer’s earliest recorded works. The song is a typical 12-bar blues and features interesting vocalizations by Domino where he seems to imitate a trumpet. In this recording, the drums are almost inaudible, but what can be heard is Palmer’s use of a continued half-open hi-hat and his incorporation of a strong backbeat – a snare drum accent on beats 2 and 4 of a measure. This is an early indication of the drum patterns later used in rock and roll. Because the piano is carrying much of the rhythm, Palmer’s simple drumset rhythms stay out of the way nicely and provide rhythmic support only. Palmer’s use of the New Orleans,’ snare-driven, second-line drumming is more subdued in this cut than in later ones to come, but the New Orleans influece still remains. The shuffled, train-like chugging of the rhythm is unmistakable. Some rhythmic tendencies of this track borrow more directly from shouter blues such as the swung/triplet-based feel being driven by the piano.

“Lawdy Miss Clawdy,”recorded in 1952 by Lloyd Price, demonstrates a continuation of the drumset rhythms heard in “The Fat Man.”However, this track contains a much clearer backbeat that is more accented and distinguishable. This may just be due to a whim of the engineer, but the effect brings the backbeat into a whole new prominence in the musical texture. Suddenly, beats 2 and 4 are more important than beats 1 and 3. This feeling of backbeat will only get stronger as rock and roll grows beyond its jump blues roots. Of note in this track is Palmer’s use of the ride cymbal virtually throughout the entirety of the song. In a method similarly found in jazz, Palmer rides along during verses and chorus over the ongoing, triplet-based shuffle feel – yet another example of Palmer’s fusion of varying genres.

On the track, “Tipitina,”by New Orleans native, Professor Longhair, Palmer demonstrates a departure from the 12/8, blues shuffle feel found in previous examples in favor of a straight-eighth, syncopated pattern. Also different than previous tracks is the absence of a strong backbeat. The snare drum accents in “Tipitina”occur on beat 2 and the “and”of 4 as Palmer is incorporating another New Orleans second-line feel. The rudimental-esque snare drum and bass drum parts, with little or no cymbal work to speak of, borrow from the marching traditions of the area. A boogie-woogie piano feel is still somewhat present, but is more reminiscent of a ragtime feel than jump blues. This straightforward rhythmic feel is indicative of the parallel direction that rock and roll will take over the next several years. In the 50’s and 60’s rock and roll had both swung, blues feels alongside the boogie-woogie, straight-eighth styles. Later in the 70’s these two feels would go on to explore other areas that lead into disco and funk.

By the middle of the 1950’s, this budding genre called rock and roll began to take shape and more artists emerged from jump blues/R&B traditions to make careers for themselves. One such prominent artist was New Orleans native, Little Richard. His 1955 cut, “Tutti Frutti”demonstrates Richard’s electric vocal stylings and energetic piano playing.

“With his [Little Richard’s] bullet-speed deliveries, ecstatic trills, and the overjoyed force of personality in his singing, he was crucial in upping the voltage from high-powered R&B into the similar, yet different, guise of rock & roll.”

Earl Palmer is the drummer on many of Little Richard’s hits and “Tutti Frutti”demonstrates his ability to provide an energy level equal to that of the lead vocalist. The track is a further exploration of the frenetic boogie-woogie feel of the up-and-coming rock and roll style and Palmer’s groove straddles the line between straight eighths and blues shuffle. Listening to Richard’s piano parts would indicate a straight feel, but the sax solos are clearly swung. Palmer splits the difference brilliantly with a quarter note ride pattern coupled with the now standard 2 and 4 backbeat as the quarter note pulse is echoed in the bass guitar. The effect is an almost two-against-three feeling during the fills and solos. Also of note are the punches, stops, and starts by the band during the second half of the verses and going into and out of the choruses. Little Richard’s unique style would become a benchmark for what rock and roll was to be for the next decade.

Even while artists like Little Richard were pushing R&B further towards rock in the middle of the 1950’s, artists such as Fats Domino were still recording songs that held on to more traditional blues. His 1956 “Blueberry Hill”is an example of this almost backwards-looking technique. Percussion-wise, there is not much variation to speak of with Palmer holding down a tight 6/8 ride pattern. What is different from the blues standards this track borrows from, however, is the presence of Palmer’s signature 2 and 4 backbeat. This aspect of the track is forward-looking and tips the tune more towards R&B or rock and roll than blues.

It is fascinating to contemplate the studio abilities of Earl Palmer. In 1956, the same year the retro-looking “Blueberry Hill”was released, Palmer cut Little Richard’s “Long Tall Sally,”another genre bulging tune that propeled R&B further into the solid rock and roll realm. A complete 180° departure from the 6/8 waltz of “Blueberry Hill,”“Long Tall Sally”is another energetic, up-tempo track. Similar to “Tutti Frutti,”this track blends the straight-eighth and triplet-swing feel along with tight starts and stops by the band. In contrast to “Tutti Frutti,”however, Palmer seems to be a little more in control of his ride and hi hat work. The parts are less frantic sounding and overall just feel more in control. Also much more prominent is Palmer’s bass drum, particular on the outro. Palmer departs from the four-on-the-floor standard pattern and works in some syncopation on the bass drum. The effect adds to the “party”feel of the track.

Rounding out the discussion of Palmer’s work with Little Richard is “Lucille.”This track, cut in 1957 after Palmer’s move to Los Angeles, displays a beginning maturation in Palmer’s playing. This maturation process can be traced over the cuts mentioned previously, but “Lucille”shows the most noticeable difference. The parts seem more in control and overall are just tighter. All of the signature Little Richard-isms are present in “Lucille”(such as the punches in the band and the trilling falsetto by Richard), but everything simply feels more polished. In the percussion, Palmer is keeping a steady eighth-note bass pattern that echoes the guitar parts, and he also holds down a tight hi-hat – something not heard to this point. The effect is a nice, crisp “chick”sound on the hats. When Palmer does move to the ride cymbal, the sound is still very controlled. The overtones do not get away from him and there is plenty of stick definition. Even in the bridge, when the drummer incorporates some floor tom work, the sound is polished and controlled. What is most noticeable, however, is a subtle departure from the roots, New Orleans groove he usually displays in his session work. All of the components are present, but the New Orleans vibe is lost amongst the more controlled sounds. This chameleon ability to blend into varying music genres and styles proved most indispensable to Palmer’s career.

Demonstrating that Palmer hadn’t forgotten his New Orleans roots, “I’m Walkin,’”released by Fats Domino in 1957, uses a heavily second-line snare drum pattern throughout the song. In fact, the cut starts with an obvious homage to the New Orleans marching style on the bass drum with hand clap accompaniment. Almost non-existent, though, is any hi-hat or ride cymbal work. A few crashes are heard on accents and at the end of phrases, but overall the track is void of cymbals. Palmer is continuing to incorporate a more prominent bass drum in his studio sessions of these years, and this tune contains variable bass drum patterns throughout. Whether it’s a straight four pattern, or syncopated with the guitar, the bass drum factors in more than in previous tracks. As with other Fats Domino numbers of the time-period, “I’m Walkin’”doesn’t really raise the bar far away from the solid R&B style. Some rock and roll elements do exist in this cut, but Domino doesn’t push the limits as much as Little Richard does.

Next… The Music (Continued)

You only get better by playing.
Buddy Rich