I’ve been excited to see this one for a while. I was waiting for the promised Blu-Ray version to come out so I could see if the instructional experience is that much better in HD. Alas, my patience expired when I saw it available on Netflix. I saw the preview for this DVD and thought “that guy sounds like a more progressive version of Steve Smith… and I like that.” As it turns out Todd Sucherman: drummer for Styx, session drummer, and clinician, is a big fan of Steve Smith. In fact Todd actually tells a touching personal story about his relationship with Steve Smith which is one of the nice little touches in this DVD that make it so great, but I’m getting ahead of myself. 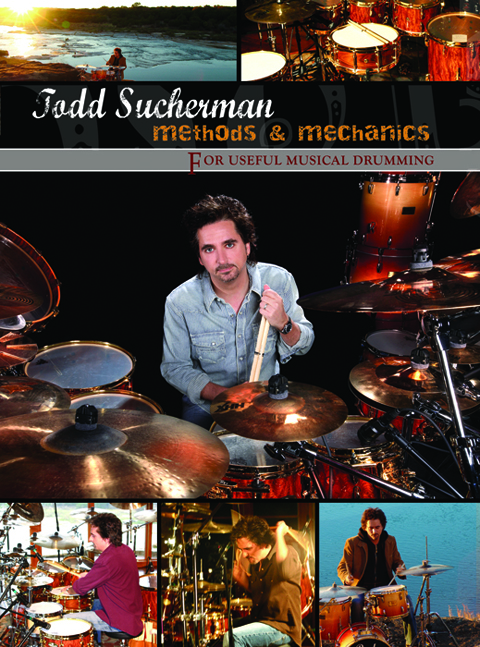 The meat of actual drum instruction is dedicated to fills in some way or another. He approaches them from an impressive number of angles I must say; Rudimental fills, Fills from songs, double bass fills, and even tribute fills if you look in the bonus section on disk 2. Every time he teaches a new concept on the drum set he almost always plays an example in the form of a fill. This is not a knock on this video; I’m just saying that you won’t get many groove oriented examples. So if you’re a huge Styx fan and you’re looking to see a bunch of Stxy grooves broken down… sorry. A short list of the topics he covers includes: hand technique, rudiments, odd times, swing time, and double bass. However he has a ton of other little lessons scattered though out the dvd too. These can vary from tips about how to keep your drums in tune to reminders to be nice to your fans. Most of the topics he covers are only discussed briefly but he’s very good at communicating his points and doesn’t need much time. He spends more time on some topics than others but always enough info so that you don’t feel short changed. He even defers to other drummers and learning materials when he knows he  doesn’t have enough time or that he isn’t the right person to go in depth about that topic. In fact, on his hand technique section he says to get Jojo Mayer’s DVD because it’s 3 hours of hand technique and a better resource. One of the most useful things an instructional video can do is recommend other materials for further study. I wish more instructional videos would do the same. There are pdfs for you to print out but I wish there were more. It’s pretty much the sheet music for all the rudiments he talked about in the beginning of the DVD. I just wish they transcribed some of the fills in this DVD. I can find rudiment transcriptions everywhere, not so with the fills.

Now, this was shot in HD and is/was scheduled to be released as a Blu-Ray I don’t know what happened to it. As of this writing I can’t find details on when and if the Blu-Ray will drop. I will do an update of some sort when I learn anything about its production status. Now then, It’s still a very nice looking DVD in terms of clarity of picture but there were some issues I had with the DVD. There were minor issues with the lighting and volume every now and again. Those were forgivable but the one that was actually a problem was with some of the menus. Not all the menus, mind you just some of them. Some of the menus were very intuitive and easy to use, and some could have you selecting the wrong thing over and over. Ok so there’s some rough edges on the production… what about Todd as a host? He’s excellent. He comes off as the teacher who tries to really get the students to like him but is still a great educator. Survive some of the jokes and he’s got a ton of wisdom for you. He’s a clear and concise teacher and he also knows his limits so he never talks past where he can effectively teach. Carrying on in the tradition of Neil Peart, he has entire sections of the video dedicated to him just talking about whatever he’s trying to teach, as opposed to demonstrating it on the kit. I’ve found that some of the best info on the DVD has come out of these thought sections. The best thing about them is that they even have him drumming in the background under the commentary to keep it interesting. A trick I hope other instructional DVDs pick up.

Lots and lots of bonus footage here to keep keep satisfied. Song commentaries, gear tour, and even a blooper reel. Suffice it to say, if I’m happy about the amount of extras you probably will be too. All in all. This is a must watch and definitely worth a spot in your collection or at least your Netflix queue.

Reviewer of all things reviewable!
« NO show this week » Drummer Talk 12/17/2009 – Gear You Should Wish For for Christmas!