Hearing protection is something we drummers need to be mindful of, but we often take it for granted until we start noticing early-onset tinnitus or other hearing damage.  As someone who did several years in drumline and many more years in rock bands sans ear plugs, I can testify that it’s never too early (or too wimpy) to take care of our ears.

One of the primary dilemmas we face when looking at hearing protection is how to best have good sound reduction while also hearing a click or a backing track for gigs and practice.  Enter the stereo isolation headphone! Now, you can have your dB-cutting cake and eat your stereo sound source too!

Vic firth is not alone in this field, and they weren’t the first to it (I believe this honor goes to the Metrophones); however, given the ubiquitousness of their brand, they have practically cornered the market on stereo isolation headphones. Just a quick browse through Musician’s Friend or Amazon will net you a few results, but big Vic is right up at the top. And for good reason!  It’s not just their name that makes these things tops.  These headphones are great at noise canceling, sound isolation, and stereo sound reproduction, all while not won’t breaking the bank.  They aren’t without issues, though, so read on to get Drummer Talk’s full rundown on what we think are the best stereo isolation headphones on the market.

What’s in the Box

The cable terminates with an 1/8”stereo mini plug for use in laptops, iPods and the like, but the package also includes an 1/4”adapter for use in more pro-level gear like monitor stations. That sure was nice for Vic to throw that in!

To me, the most important thing iso headphones have to do is do an effective job of lowering the volume of the sound around you.  Amazingly, these cans can limit overall sound by up to 24dB, making them on par and even exceeding some dedicated noise-canceling headphones and ear plugs. What’s even better is there is little to no bleed making them perfect for use in the studio where you often run into the problem of overhead cymbal mics picking up the click from the headphones.

Take note that with so much sound being canceled out by these headphones, it can get tough to hear your own drums.  If you’re using these in a live situation, I would recommend ensuring that you have some of your own drums in your headphone mix.  This will save you from the temptation to overplay your kit just so you can hear yourself.  If you don’t have a real drum mix, even bringing your own SM58 and a 4-channel mixer to give your own drum mix can be helpful.  Remember, you’re not trying to get a great sounding kit with this mic, you’re just wanting to make sure you can hear yourself!

What helps to separate these iso headhones is the fact that they don’t just cancel out unwanted sound, but they have great speakers within them.

The sound quality on these headphones is superb.  They have a pretty flat response without over emphasizing the bass too much (an epidemic that plagues most headphones on the market today. Thanks, Dr. Dre.). If you’re looking for a pair of stereo to be your “daily wearers,”to experience

One thing that took some getting used to is the fact that the headphones aren’t all that loud.  When compared to my Senheiser HD380s or even my Apple earbuds, they simply can’t beat them volume-wise.  But that’s ok!  They’re not supposed to! Remember, these are designed to help save your ears, so why design a headphone that can protect your hearing from the outside, only to enable you to blast your hearing away from within the things themselves.  As you adjust to this, you realize that because the outside sound is drastically reduced, you don’t need the headphones to be that loud.  That’s not to say that these things are quiet, because they’re not, but compared to other commercial (as in, non-sound isolating), they’re simply not as loud. Again, this took some getting used to, but once I adjusted, it was smooth sailing. 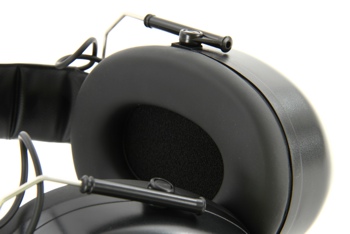 What you may notice when you first hold these is that these headphones are heavy.  After having taken some apart (more on why in a bit), what’s inside is a solid stereo headphone with some serious foam and insulation. Also, you may find that these guys can really put a squeeze on your head if you’re like me and have a big, fat, meaty head. I actually had several students complain that the headphones were too tight.  They do break in, somewhat, so it’s not a problem that persists for long. The good news is, you won’t be needing to go Darren King on these and duct taping them to your skull just to keep them on.  They vice-like grip does serve a purpose!

Another things to note is that these things can get pretty sweaty.  The rubber ear pieces aren’t the most comfortable things and can get pretty slick in an, ewwwwwwwwwwww kind of way.  After a few workouts in a practice room, you’ll know that these aren’t necessarily for sharing. The plastic and rubber earpieces do allow for easy cleaning, though.  Just be mindful not to get water or soap on the inner foam piece itself.

For the money, these headphones simply can’t be beat. I bought mine several years back for $99, but VF has dropped the price even lower and they can be found around the web for under $50.  That’s simply unheard of! There is really no excuse not to add these to your gear list.

If these headphones had an Achilles heel, it would be in their build quality and overall durability. The rubber earpieces are solid, but they glue used to attach them to the cans themseves can breakdown, causing them to come apart.  This isn’t anything some industrial glue from Lowe’s can’t fix, but it’s a pain if it happens.

Also, I’ve had some that have developed an internal rattle in one of the ear pieces.  I’m not sure what’s caused this since I’m pretty meticulous about my gear, but alas, there it is.

The cans themselves are sturdily built of the same plastic that can be found on the other VF non-stereo iso headphones, but as with those others, they suffer from the same, awful, vinyl covered headpiece. I don’t understand why the tops of these are so shoddily made when everything else is so stellar.  It just feels cheap and thin and really lowers the overall impression of these, especially considering that’s what you grab and carry them by. Le sigh. I guess this is the price you pay (literally) for having a low-cost headphone. Thankfully, though, these aren’t prohibitively expensive and if they do go out, you don’t feel like you have to take out a second mortgage to get a new pair. 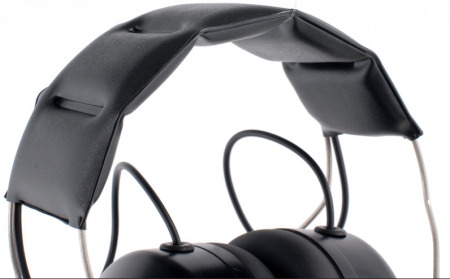 These are easily the best bang for your buck when it comes to stereo isolating headphones.  I did take 1 mic off for ear cup and overall durability issues and the fact that they can squeeze a larger head and can be a bit sweaty.  However, the superb, flat sound quality and amazing dB reduction make these my first choice for recording gigs as well as drum lessons.

You won’t win any awards for fashion, and you’re bound to get a few jokes tossed your way, but just roll with it and rest in the smug, self-assuredness that while you may look like your landing a 747 on the tarmac of La Guardia, at least you’ll be able to still hear the plane coming while listening to your favorite song!

Drumming was the only thing I was ever good at.
John Bonham