Snare drums can make or break your gig. Finding the right shell to accommodate the style and nuances of the music is a challenge every drummer takes on.

For collectors and seasoned session players, each song produces potential for a snare change. But aren’t we all searching for our perfect “Workhorse”? The Jim Riley Signature Black Magic could be just what you’re looking for.

At first glance the drum is visually stunning. The laser engravings throughout the stainless steel shell are inspired by Celtic designs, and were placed on the drum in tribute to America’s Firemen. Just looking at the drum, its 8-inch depth guarantees a presence in it’s sound that is sure to project in high volume situations. Die cast hoops, and timeless tube lug design give the snare a clean appearance, especially with the black nickel coating throughout. The P85 throw off and butt plate comes standard. The rest of the hardware shows an attention to detail with small screw footprint on the Interior of the Drum, matching black spacers underneath the tension rods, and a golden bed of 20 Snare wires. 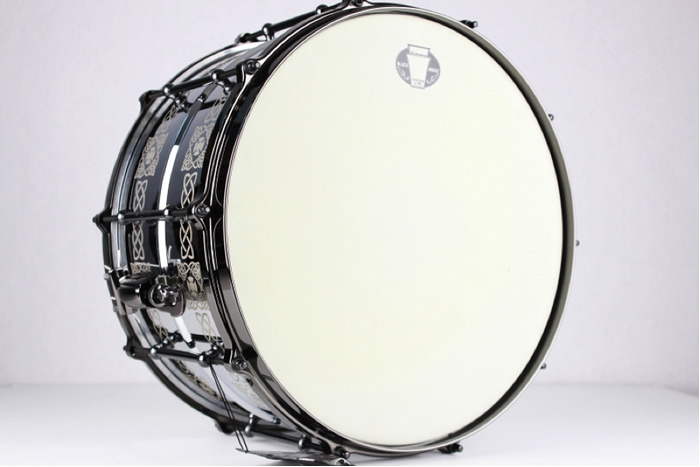 Now lets turn our attention to the sound of the drum. Its tuning range was adequate to cover a wide scope. The most obvious choice for my first tune was to go low. With the deep fat sound coming back into the forefront of pop so quickly nowadays, this snare has the perfect dimensions. As the air pushes from the batter head downwards, this massive volume of tone has lots of room to produce warm attack, and a myriad of pleasing overtones.

Taking each lug up to a middle tuning the drum responded well. You can really hear the characteristics of the steel shell start to come alive as ping shots, and playing the edge creates a classic steel snare sound. The higher tuning provides a sharper crack and crisper tone via the head tension. What is pleasing about this particular snare is that even in higher tunings, the body of sound is lush and deep. When the lugs are cranked, the projection and clarity of the rim shot carries the note through a dense mix, or ensemble and retains the fullness of many mid frequencies.

Straight from the factory, Ludwig outfits this snare with a Ludwig weathermaster head decorated with the company Logo. As this drum was purchased for a session, I was quick to replace the weathermaster with a Remo Ambassador X. This head lasted the drum a good 5-6 months and was put to its paces. I have recently just put on an Earthtone Calfskin head on the drum and the sonic characteristics were deeply enhanced especially at lower to mid tunings.

Studio – I played this drum on the first 3 out of 4 songs for an artist I was working with named Austin Livingood. The record is named “The Weightless Anchor: By Train (II). I bought the drum wanting to mimic a tone relative to Don Henley (I Can’t Tell You Why – The Eagles) or Steve Jordan (Vultures – John Mayer).  When testing out microphones I found that any typical mic an engineer would place on the snare was sufficient in capturing the tone I was looking for. In the room, the mix, and in the monitors I could distinctly hear that the drum translated well through a studio set up. When used on some other sessions further down the road, I found that through better pre-amps, compressors, microphones, and other outboard gear the snare was undeniably fat.

With some treatment achieving the aforementioned tones was a breeze. Applying a wallet, Moongel, Snareweight, or towel/bandanna certainly gives that throwback sound.

Live – From small-unmiked gigs to large rooms and close miking, playing the drum out has produced great results. A solution I use often is to cover the head with a bandanna when the song requires. The depth of the snare really projects then, giving the backbeat a solid and booming presence. On the other hand, for some pop and gospel gigs I have played, taking the drum up to a high tension has obviously been the right choice. As mentioned in the tuning section of the article, the projection and clarity of my rim shot has cut through some pretty “boomy” low end. 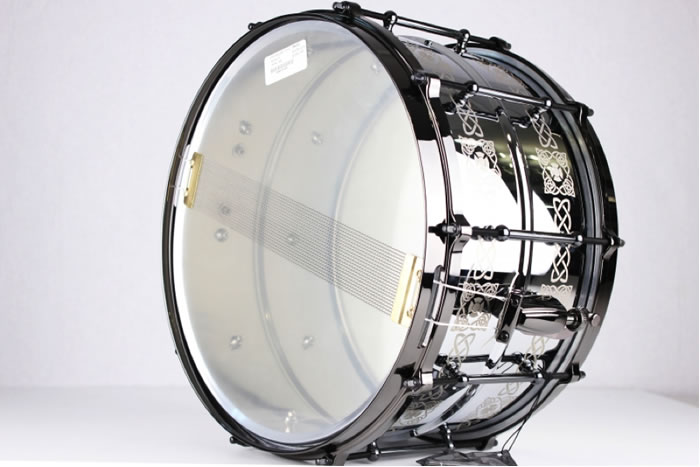 The clear advantages of this drum come from its price, appearance and versatility. With the 14×8 dimensions not many other snares are built bigger. Achieving the perfect low, warm backbeat is easily accomplished. The engravings on the shell, and the hardware itself are sure to turn some heads.

MSRP on the drum is $670, retailing from between $439 new and $280-300 used (Ebay, Craigslist, Reverb). The snare packs a lot of Bang for your Buck, and definitely looks like you paid more than a pretty penny. Compared to other drums of the same dimensions, I would consider this signature snare to be the best buy. In fact, the most common drum I found similar was a Dunnett, which was priced $200-300 higher.

The biggest disadvantages to the product come from its size, and the nickel coated lugs and hoops. Finding a snare stand to accommodate its size can be somewhat difficult. For drummers that like to sit relatively low on the throne, be sure to have a snare stand that can lower the drum to a comfortable playing position. If you sit close with your legs naturally angled at the kit, you may have some contact with the bottom sides of the drum. If you like to have all of your drums in cases, I would suggest ordering online, seeing as most music stores do not stock this size over more conventional snare drum sizes.

My quarrel with the coated hoops is that after a couple months of playing, the nickel began to wear away where my sticks played rim shots. Personally, I dig the look, and like my gear to show it’s merits. If you enjoy your drums to still retain their original shine and appear as if new, a hoop replacement could become your solution. Another drawback I encountered was the loss of a bottom tension rod after a gig where I had not retuned the bottom head in some time. Whereas the fault was mine, finding a perfect replacement wasn’t easy.  Although nickel coated tension rods aren’t uncommon, most general music stores do not stock these items either. I was complacent to settle with a generic chrome rod, but if you encounter a similar instance I would suggest ordering factory direct. 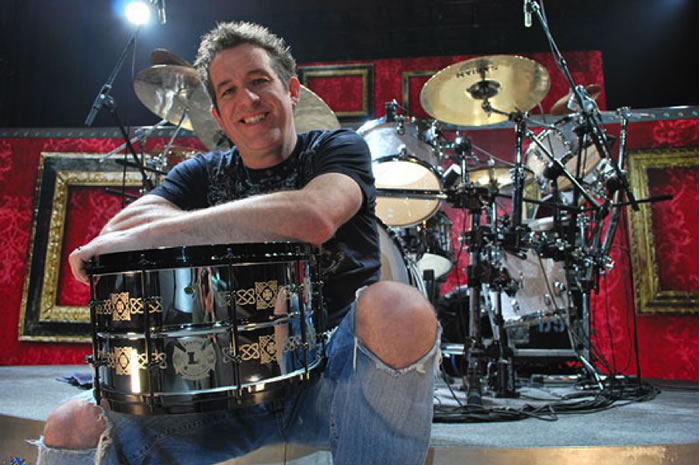 I would suggest this drum to anyone seeking a snare more full-bodied than a shallower counterpart. I use this drum as my main snare, and it has never become undesirable. The downsides to the product have little to no affect on the tone and performance I pull from the drum. Its pros way outweigh its cons, and its retail price is definitely affordable. Ludwig snares are often considered the industry standard, and that standard is upheld.

I write gear reviews!
« Jimmy Chamberlin’s take on the U2/iTunes debacle » Taylor Hawkins weighs in on U2’s New Album. Says, “It Sounds Like a Fart”

I once saw a car sticker slogan somewhere, along the lines of the R.S.P.C.A. but about music; 'Stop Cruelty To Music', I.m going to get one of those for my car.
Gary Husband