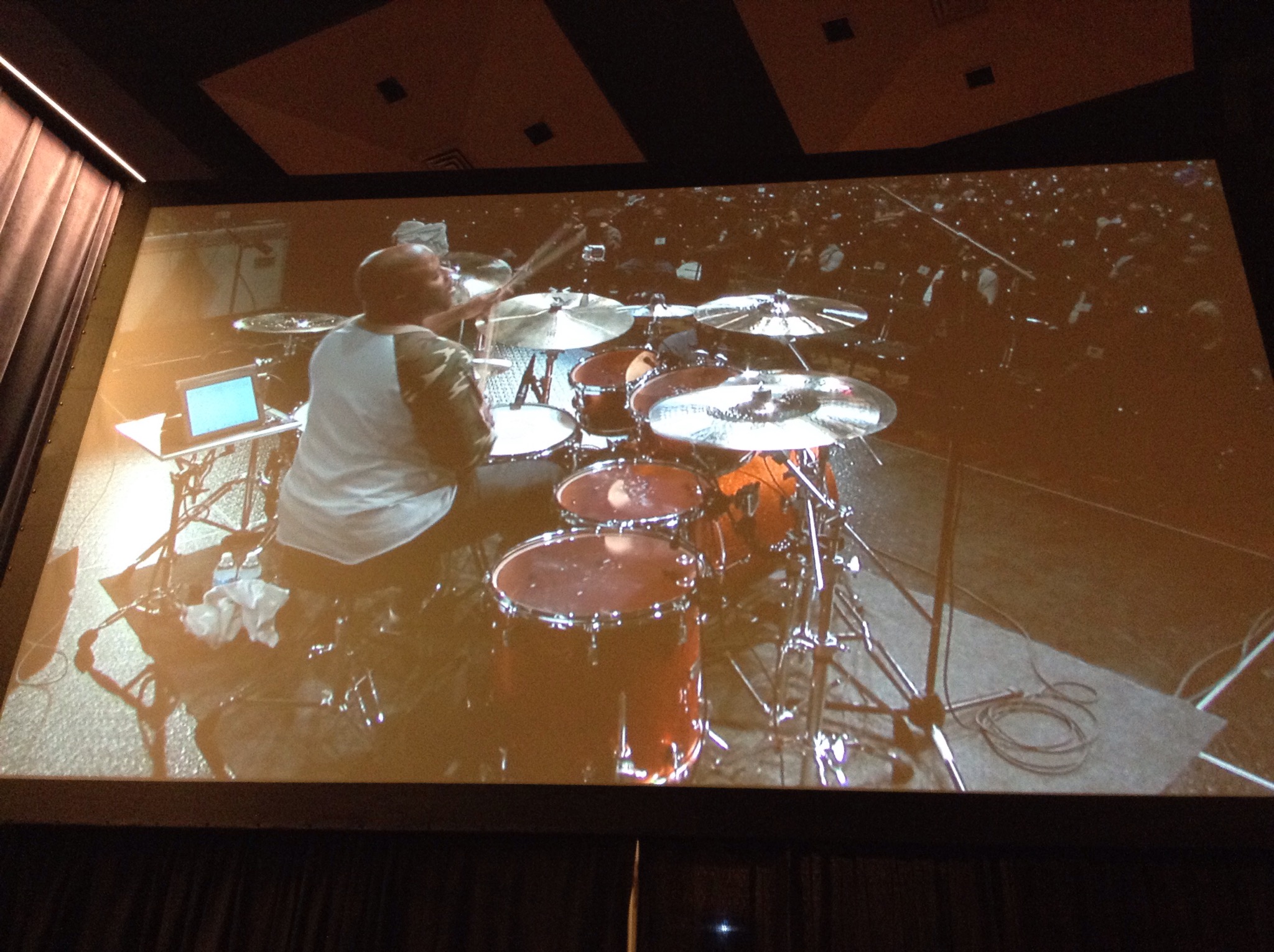 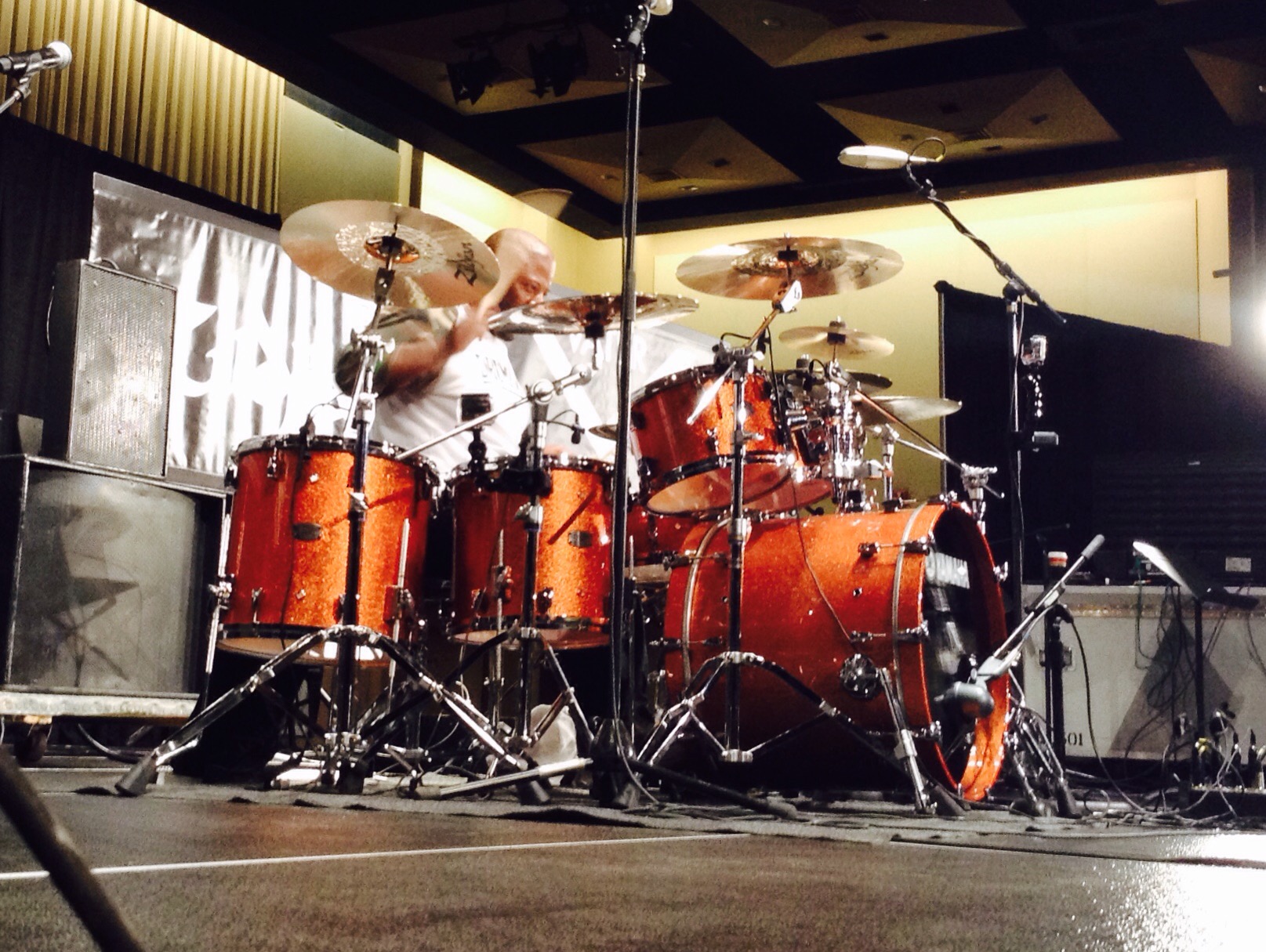 Playing some hot tracks. Lots of fills over the bar.

Takes the mic and thank yous, 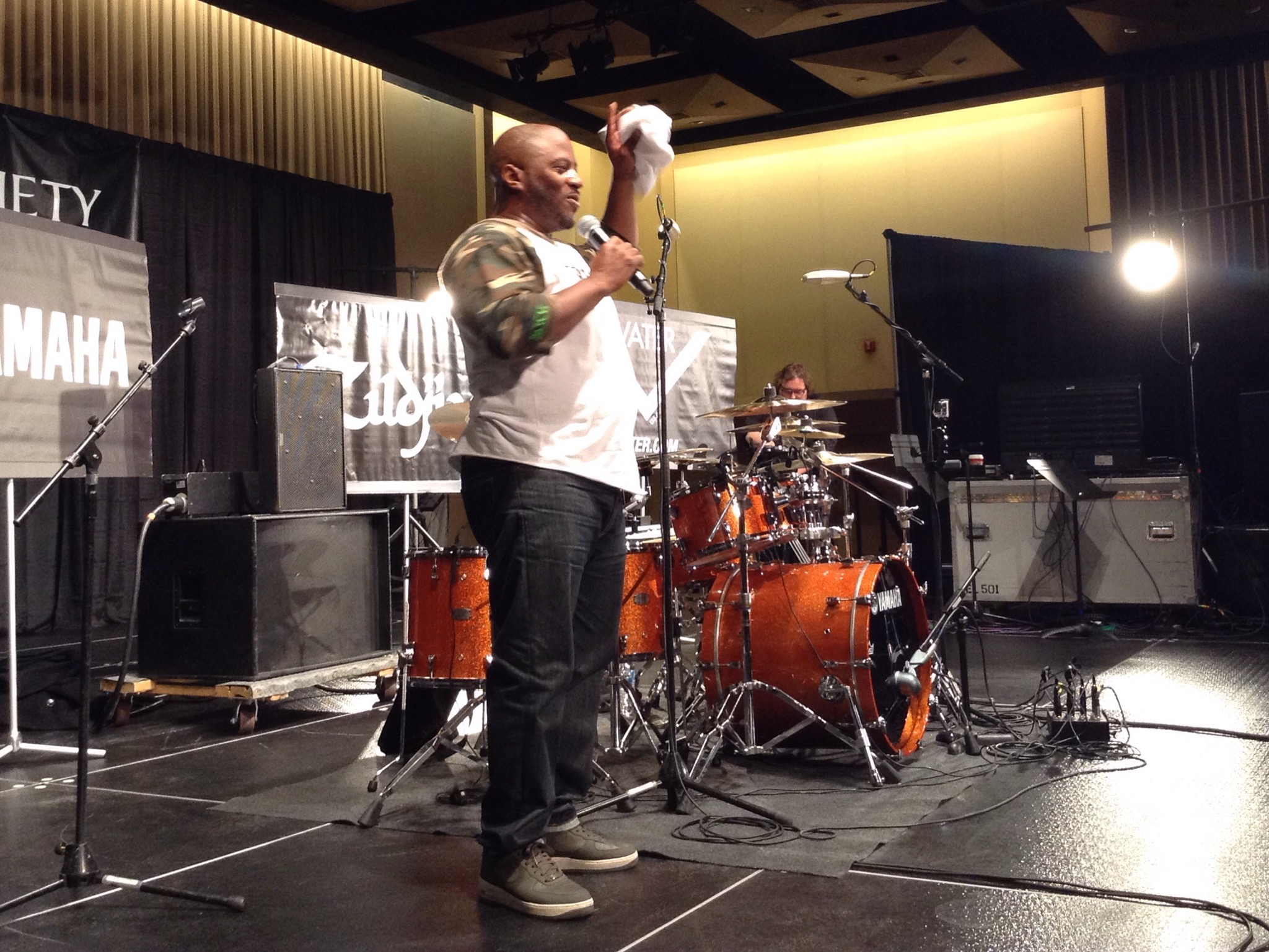 “The artists that I work for don’t know what a paradiddle is. They just know if it feels good. The artists that call me, do so because they like my feel. If they don’t like it, they’ll call the next guy.

The key is listening. It has to make musical sense. I don’t play drums, I play music. My feel, my ears, my versatility, and knowing how to read. Knowing how to read opens doors for you. Take advantage of YouTube, it’s not that hard. I played an awards show that I had to read, otherwise I wouldn’t get the gig.

What do I do in-between the big gigs? I have to be versatile. Jazz, fusion, hip-hop, RnB. Even a country tune like with Jessica Simpson.

How do you play with a click? Sometimes the click moves, but don’t trip out.. Don’t panic. After a while, my natural clock kicks in and I don’t even notice the click anymore.” 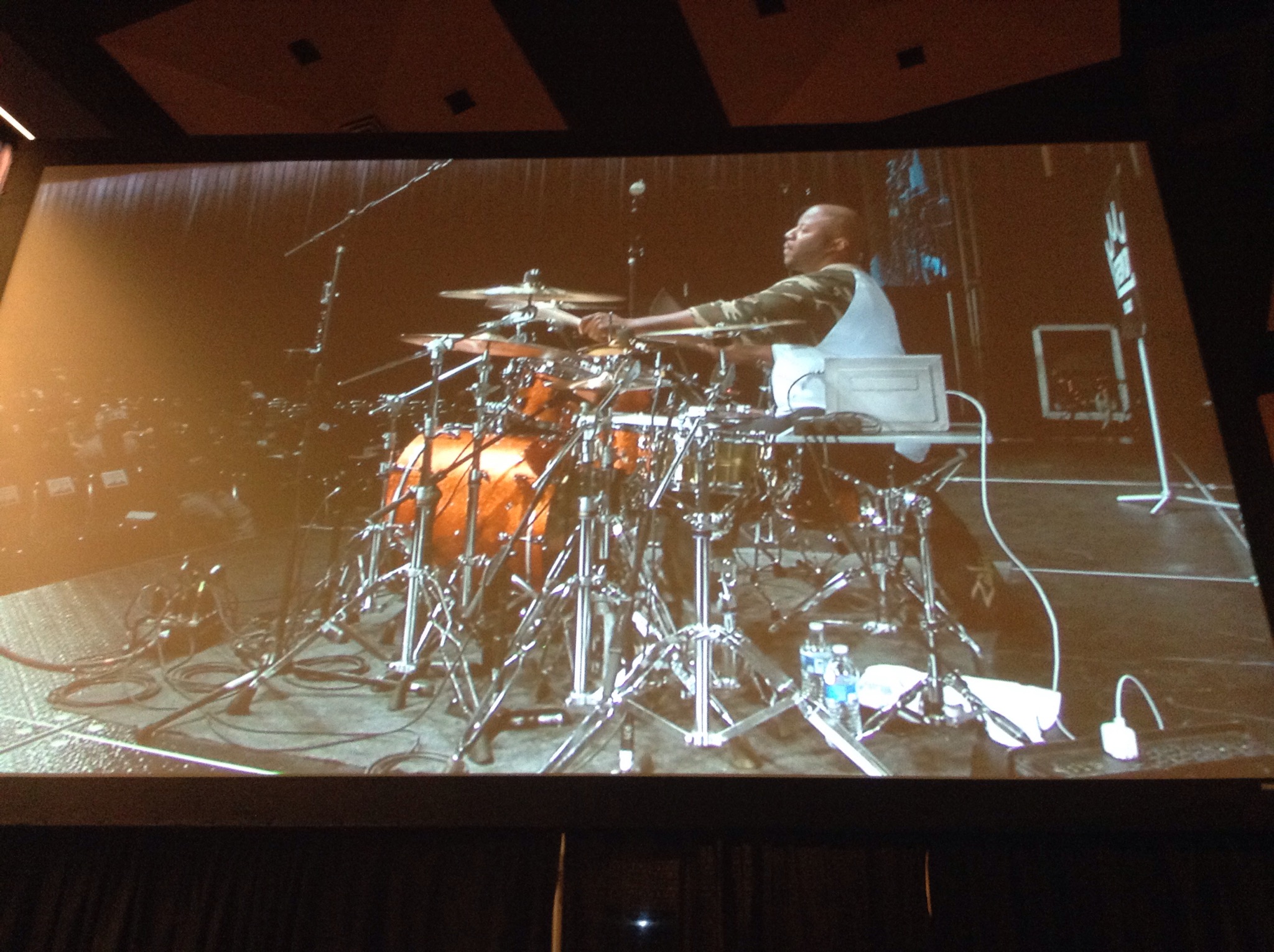 “90% of my gigs are ‘meat and potatoes.’ It’s not always about chops. Just play through the song.

When I started playing with George Duke, he said, ‘Man, just do wha you do. I was just playing the part and he really wanted me to open up and play! We started recording his last record, and I asked him where was the click, and he said, ‘You’re the click!.’ He said he’d tell me if it was too much, but he never did tell me it was to much!”

Q: Approach to soloing?
A: The music dictates the groove I play, how much I play, how little I play, It irks me to see a band laying a groove and the drummer just brrrbbrrrbrrr. I really go off the melody and my heart. A lot of times I’ll solo off a musical motif or a lyric. It’s really feeling, and sometimes I feel like wailing. I need to get something off my chest, but normally it’s in context.

My listening relies on vocabulary that I know. Really study your vocabulary! Style is important. Some guys will play a gospel solo in a jazz tune.

Because I’m also a producer, I hear notes. It’s really important for us drummers to learn another instrument. My musical knowledge helps me lead the other players into things. Because I’m listening and because I know music, it really helps out a lot. I know song form and I know chords. After a while, the forms sound the same, and you can do a lot of different things.

Q: About playing openhanded?
A:The challenge is playing right handed in my lesson to show the student. I write with my right, eat with my left. I’ve always played left-handed. In school, they told me it wasn’t right. If it sounds good there’s no wrong way to play.

Q: How to get foot in door?
A: There was a group in college, Howard U. Other guys in marching band had a group, “Shy” and they had a song on the radio. They moved to LA and I moved with them. I was in school and they heard me shedding and asked me to join. If you’re interested in these touring gigs, send your YouTube to the music director. I got some gigs when MD’s hearing me at a $100 club date in LA. But you need to be in LA or NYC. That’s where all these music directors are. YouTube is good, though. Get hits and views and the MD’s will notice.

Q: Do you use brushes?
A: Yes. I played a Christmas show with Jessica Simpson and had to use them. I played a straight-ahead record and used them. If you want to be a working drummer, you need to know all these techniques and styles of drummers. Know your history and your styles.

Q: Tips on the pocket?
A: Pocket isn’t just 2 and 4. It mainly is. The most important thing to me in any popular song is the 2 and 4. No matter what your kick and hat are doing, the 2 and 4 has to be steady.

The other thing is grace notes. It’s feel. Whatever the groove of the song, you’ve got to keep the pulse moving. Don’t play for other musicians, play for the people that don’t know anything about music. If it feels good to them, then it feels good!

Q: How would you recommend to expand someone’s jazz?
A: So many guys. Will Kennedy, Dennis Chambers, Vinnie on anything, Billy Cobham, Weckl. So many different styles. Lenny White, Tony Williams, and that’s just the fusion side. There’s also Philly Jo, Tain. Know your history. It really helps your style. 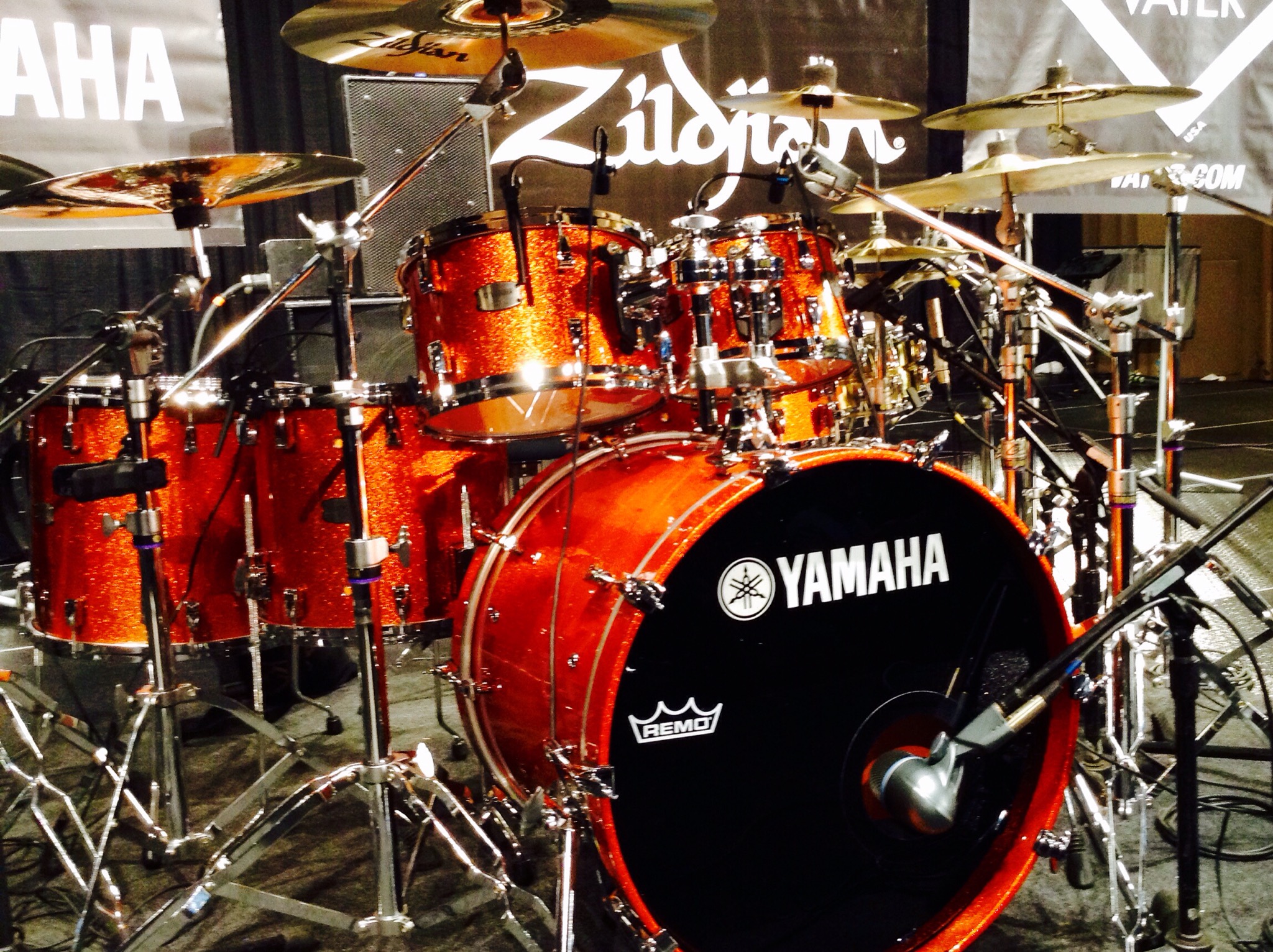 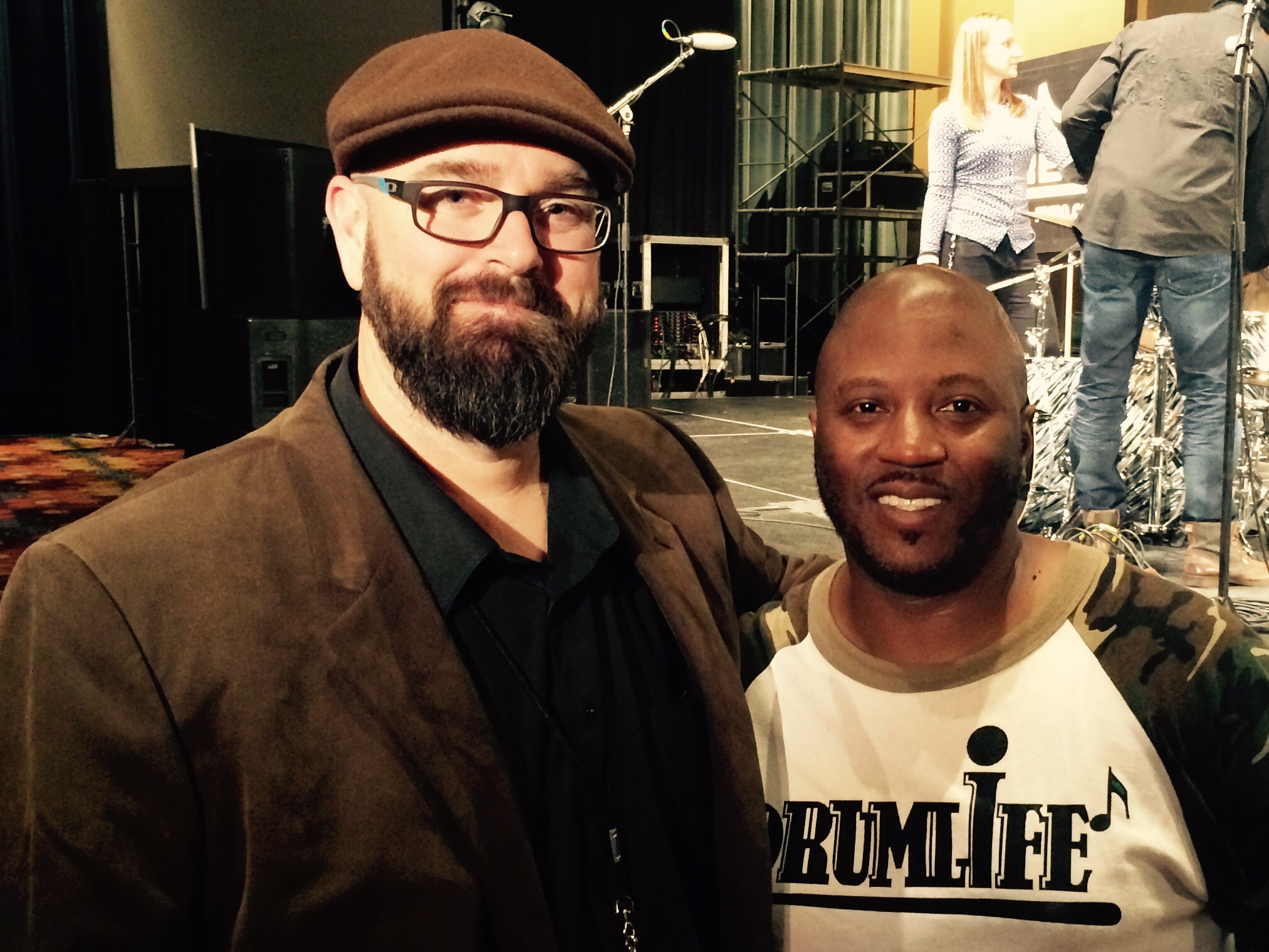 But I think that any young drummer starting out today should get himself a great teacher and learn all there is to know about the instrument that he wants to play.
Buddy Rich