Evans is trying to move the needle on modern drumhead manufacturing by rethinking the way drumheads are constructed. Is it truly groundbreaking or is it marketing snake oil?

Since the transition to mylar heads from skin, not much has changed in the way drum heads are manufactured. While various coatings, dots, and thicknesses have made appearances over the years, in the end, we still have a plastic film tucked into a metal collar.

Evans, never content with resting on their laurels, is attempting to push drumhead tech forward with their new Level 360 drumhead manufacturing process. They’ve moved (or will move) all of their existing drumhead lines to the system and are betting you’ll see and hear a difference. 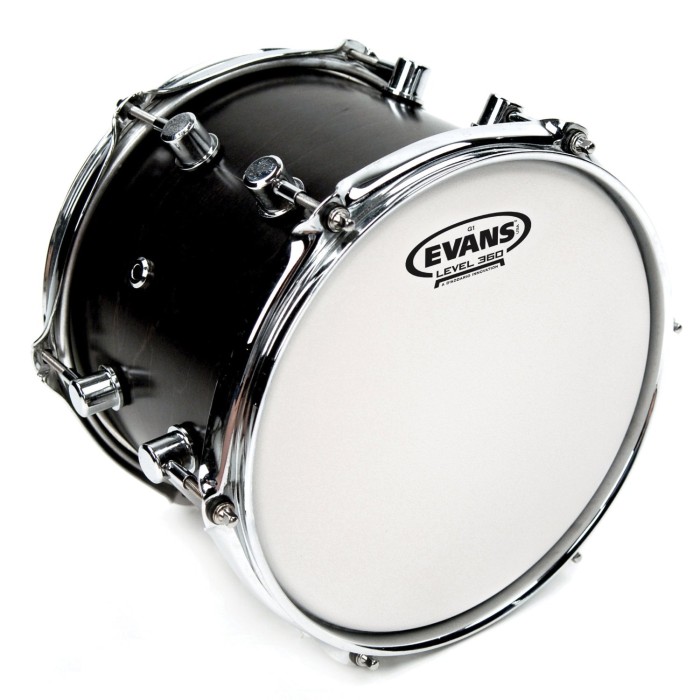 Let’s first examine what Evans is saying about their new head technology. The marketing touts four primary breakthroughs with the Level 360 heads.

Steeper Collar: Out of the box, I did not notice a visibly steeper collar on the 360 head, and certainly not one as steep as the graphic in the above video indicates; however, I did notice that the hoop itself is a hair thinner (think height) than the Aquarian head I was replacing. The end result is that there is more of the head on the side of the shell. Whether this makes for any drastic different, I’m not so sure, but it does mean a more perpendicular contact with the bearing edge, and that’s one of the elements that will come up in a minute!

Rolled-Over Hoop: As I mentioned, the hoop is a fraction thinner than the head I was replacing, and does feel more rounded. The aquarian Studio-X is downright square in comparison. The top of the hoop is somewhat rounded, and it feels really nice.

Balanced Contact: According to Evans, the 360 gives a constant contact point around the entire bearing edge (hence the 360º in the name).  This is in large part due to the perpendicular contact point between the head and the bearing edges. According to Evans, this eliminates the need for the star pattern of tuning that we’ve all spent our lives learning. I’m not sure how a head alone would accomplish this, but my experience with it did not give me any reason to doubt this claim. Granted, I’m not necessarily working with really high tensioning, but I found no audible differences when tuned in a star pattern or when tuned clockwise around the hoop. But there is still a little part of my brain that believe the head is not seated properly!

Greater Tonal Range: The last point Evans makes is that Level 360 heads have a greater tonal and larger standard tuning range. In my experience, this wasn’t necessarily the case, mainly because tonal range is almost entirely dictated by the drum itself rather than by the head placed on it. Yes, there are some variables that a head can bring to the party, but a 14″x14″ floor can only do so much. In my opinion, this is the least substantial claim with the Level 360 heads. I give Evans props for rethinking the drumhead, but I found that my drum still had a sweet spot that was pretty much the same between the 360 and the Aquarian.

I put two specific heads through their paces for this review, and I have lived with these for the last several weeks.

I installed a 14” Heavyweight Coated head on my snare and a 14” G1 Coated on a 14″x14″ floor tom. The kit I am using is a really basic, Ludwig Accent kit that I play on every week at church. Why not my Tama Starclassic? I figured if the heads can work on a budget level instrument, they can work anywhere!

The Heavyweight snare head is just that – HEAVY. It’s thick, with a reverse dot, as in two 10 mil films plus a 3 mil dot! I chose this head for the snare not because I like to drop the hammer when I play “Trading My Sorrows,” but because on a church kit that gets steady play, durability is important. Where I made sacrifices in tonal expressiveness, I hope to gain in longevity. 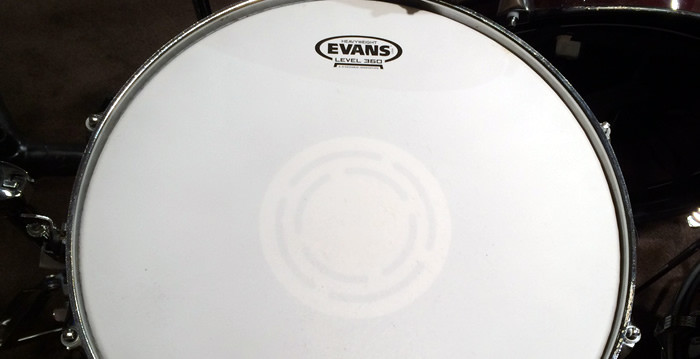 The head tuned up quickly, and easily. I found that I had to crank it a little further than I thought just so I could get a good cross stick sound (a staple in church drumming repertoire). Even still, the cross stick remains a little muted for my taste, but then again, how many guys rocking the Heavyweight are looking for a resonant, woody cross stick sound?

The head responds great, with a nice pop in the middle and easy rebounding around the edges. As with cross sticks, rimshots come off a little muffled due to resonant limitations of the head because of its thickness. If you’re looking for a good, funky head to pop all those Jabo ghost notes and rim shots, this might not work.

Thankfully, the extra thickness means I’ve not had to mess with any external dampening, so it’s working great in all its naked glory.

The G1 coated on the floor tom tuned up in a jiffy! I did have to crank it a little further than I thought just to eliminate any unwanted growl, but that was also partially due to the need for a new resonant head. I wonder if this is true across all Level 360 heads, or if it’s because of the thinner (shorter) collar requiring further travel by the drum hoop. Regardless, the floor tom head really sings nicely and the coating helps to eliminate any real unwanted sustain.

The heads have been on for about a month and a half and I am noticing some tiny “flaking” of the coating on the snare head. I’m not sure I’ve seen this before – and it’s not even really at the impact spot, but rather, towards the right side. Perhaps I knicked it while doing some brushwork, but the wear is unlike any I’ve experienced. That said, the coating is holding up very well and brushes still sound great.

The Level 360 heads are a bold move and Evans has served notice to other head manufacturers that they are not content to stand still in an ever-evolving marketplace. They clearly believe in this new system, especially considering all of their head manufacturing has moved to this technology (now including bass drum heads).

As with all heads, you can expect to pay a around $1 per inch depending on size and options you’re looking for. The 14″ Heavyweight clocks in just over $17 and the G1 will set you back closer to $12.

The head does feel very polished and well thought out; however, I’m still not sure that some of the claims made by their the marketing will be as noticibly earth shattering as they’d have you believe.

A versatile and well-rounded percussionist, composer, and clinician, Dave has performed and taught around the U.S. and Europe. His expertise ranges from drumset to drumline; classical percussion to world music; and orchestral to electronic music production.

Certainly one of the more common experiences in the jazz field is discovering someone new. Improvising musicians are capable of being musical travelers, voyagers. We want to join in on whatever we hear. There is a freedom to wander the musical landscape.
Gary Burton