Transcription – “The Pretender” by Foo Fighters

You’ve got to be a beast to play behind Dave Grohl in the Foo Fighters, and Taylor Hawkins fits that bill. He brings raw power to “The Pretender” by Foo Fighters. 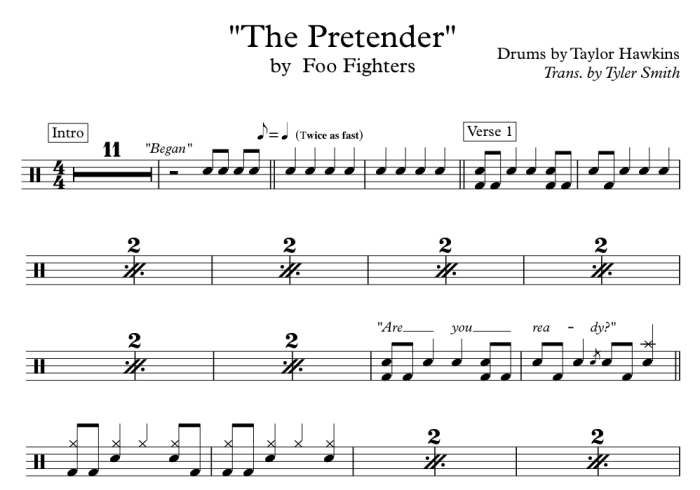 The intro is in a half-time feel, so note that what feels like 8ths notes on the snare drum as you start immediatly turns into quarter notes after 4 hits. Although the song starts ate 86, when the drums get going, the tempo is really 172.

Keep an ear out for other half-time feels throughout the song.
The groove only ever use quarter notes on the HH/ride, so you need to be thinking through the subdivisions and practicing a lot of offbeat bass drums with no HH/ride to stablize them.

Look closely at the fills and practice them independently being sure to work up the patterns before putting them into context. They look easy, but this track is FAST.

After the first chorus, there are different endings each time, so you want to make sure you know where you are at in the song.
Highlight and practice the fill before the final chorus slowly and get it under your hands before slowly bringing it up to performance speed.

1st ending of last chorus, you have a repeated figure, but its 5 16th-notes long, so it looks different when it comes up the second time.

Drummers don't write - or at least, that's what everybody believes.
Tony Williams