The true masters never stop being a student of their craft and never stop looking for inspiration. Sometimes, that inspiration comes from artists younger than yourself! We can all agree that Steve Smith is a true guru of the drums, but what jazz albums featuring younger drummers (younger than Steve, that is) inspire him?

This is interesting!  We’ll keep an eye on it for sure.

The 2013 Drum Fantasy Camp will once again bring together drummers of all ages, styles, and playing levels, to attend concerts and small group learning sessions with the world’s greatest drummers.

So far, Thomas Lang, Steve Smith, and Dave Weckl are on board.

Mike’s done it again with a fabulous and in-depth interview with Steve Smith. The article is complete with pics, and some pretty rare video finds.  Here’s a little taste 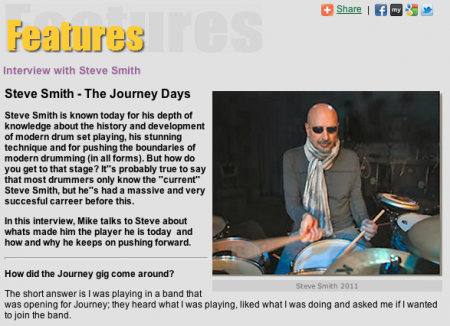 How did the Journey gig come around?

END_OF_DOCUMENT_TOKEN_TO_BE_REPLACED

It’s Christmas Break so enjoy a bit of Holiday cheer with a show from the archives! Enjoy!

This week, part 1 of Drumfola’s 2-part series on building custom drums from A to Z(ed!), plus we talk about about featured drummer, Steve Smith.

Steve Smith, shiny headed drummer extraordinaire has done it again! Standing on the Shoulder’s of Giant’s is Steve’s tribute to all the greats that came before him (and he does them justice.) Steve Smith’s Jazz Legacy was originally Buddy’s Buddies, a tribute band to the work of Buddy Rich. As they went on, they started expanding to the work of other jazz drumming greats. Eventually the name was changed to Jazz Legacy because they had left the realm of a Buddy Rich tribute band and became something more.

This video contains the entire 2006 Modern Drummer Festival performance of Steve Smith’s Jazz Legacy and after each song there is a long discussion about it between John Riley and Steve Smith. John Riley’s presence does help make the DVD much better and I’ll explain how. If you remember my review of Steve Smith’s Drum Set Technique & History of the U.S. Beat, my one criticism was that Steve Smith was very stiff when he was talking to the camera. Well, because John Riley is there, Steve has an actual person to talk to. The effect being, Steve is much more personable and easier to watch. But Riley is more then just someone for Steve to bounce conversation off of. He is a Jazz scholar in his own right and adds much insight and a different perspective to Steve when they discuss the performances and the artists to which the performances are tributes. END_OF_DOCUMENT_TOKEN_TO_BE_REPLACED

Steve Smith and Vital Information are swinging through Europe this Spring and Summer. Here’s a breadown of their itinerary (according to vitalinformation.com):

AND in the evening:

END_OF_DOCUMENT_TOKEN_TO_BE_REPLACED

These are Tala Wands. The top one is the smaller and more sticklike bamboo version and the bottom one is the bigger birch model and feels more like a rod in the traditional sense of the word. These things came into being when Steve Smith started getting into indian rhythms. He started playing with giants in indian music like his current favorite drummer Zakir Hussain.

He noticed that the drum-set, when played with sticks, was overpowering the other instruments. So he switched to rods. Problem with rods were that they lacked rebound. So he says “I need a rod with bounce” and no later than he uttered those words he was presented with not one but two models of rods that fit the bill. END_OF_DOCUMENT_TOKEN_TO_BE_REPLACED

You owe it to yourself to watch this classic video of Max Roach performing Mr. Hi-Hat.

Although I’m not sure of the exact date of this video, judging by the clothing, Max’s age, Jo Jones’ age (he died in 1985), and the video quality it looks to be late early 80’s-ish. END_OF_DOCUMENT_TOKEN_TO_BE_REPLACED

This dvd is kind odd in the sense that it accomplishes two very distinct goals as opposed to one vague one. The first dvd in the set is like a clinic with general drum technique in mind. The second one is like a themed showcase concert, the theme being the history and development of the U.S. beat. I’m extremely satisfied with the set as a whole but the second dvd is the thing that makes me glad I bought it. I personally think people of all sorts need to know at least something about their history, drummers are no exception. So I’d like to thank Steve and the guys at Hudson for making this a two disk, two subject set. I say this because they very well could have just shot the first disk and sold it for half price. The first disk can stand on its own but I don’t think that the second one would sell by itself. Good thinking, Hudson. END_OF_DOCUMENT_TOKEN_TO_BE_REPLACED

Iâ€™m not at all a technical gear guy. I just love to get up there and beat the crap out of stuff.
Mike Portnoy