Zildjian reveals their 37 road-tested rides as selected by their artists.  The list ranges from the ubiquitous Sweet Ride to K Connies. Do you agree with the list?

Zildjian’s How Do You Practice Sweepstakes

Zildjian wants to know what you use to practice and is giving away Gen16 cymbals to the best stories!

The contest opened April 7th and goes until May 31.

Win mics from Audix, gear from PDP and DW, heads, cymbals and more!

The Scholarship winner will receive the following:

Russ Miller is such a beefcake!

Welcome to Drummer Talk #170 where we talk about some of our best and worst gig experiences!  In news, we talk about yet another drummer with his own coffee, the K Zildjian scholarship, DW’s new airlift system, and we pay tribute to the late, great Levon Helm.  Did we mention that Jeff Bowders is the drummer of the week?! 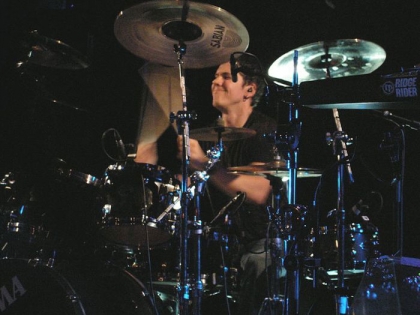 END_OF_DOCUMENT_TOKEN_TO_BE_REPLACED

We uncover the tangled history between the world’s two largest cymbal makers: Zildjian and Sabian, complete with an interview with Andy Ziljdian! The double stroke roll is the rudiment of the week, Manu KatchÃ© is the drummer of the week, and we talk about Roland’s new gear in the news. Oh, and Carter is ENGAGED!!

Proving that the Memphis Drum Shop is a top notch and high caliber establishment, a couple of the drumming community’s up and coming players dropped by recently and showcased some of their talent. Ronald Bruner Jr. (Stanley Clark) and Jason McGerr (Death Cab For Cutie) both sat down at the kit in MDS’s cymbal vault (which houses the largest Zildjian collection in the world outside of the Zildjian factory itself) and gave viewers a tiny showcase.

It’s interesting to see the difference in styles between the two guys. Ronald is very flashy and all about the speed while Jason is very methodical and has a  more calm, cool, and collected vibe. Love both of their playing.

In their never-ceasing effort to build up their drumstick line, Zildjian has announced three new artist series sticks: Ronald Bruner Jr (Stanley Clarke), John Blackwell (Justin Timberlake), and Ronnie Vannucci (The Killers). These three names will undoubtably boost Zildjian’s street cred for their sticks, not that they needed it. What I think it interesting is the fact that Bruner, who endorses Sabian, uses Zildjian drumsticks. Just seems like an interesting wrinkle in the situation. I wonder if he’ll switch cymbal companies sometime soon…

END_OF_DOCUMENT_TOKEN_TO_BE_REPLACED

Loads of Zildjian Players Play a Part in Grammy’s

Interesting story on Zildjian.com about this year’s Grammy’s. They list all the acts that were nominated whose drummers play Zildjian cymbals. Pretty big list. It’s interesting to see how many bands have drummers that use Zildjian. A couple years ago, I saw a story about how most of the Grammy winners have drummers who use Paiste. I wonder if the overall trend is going back to Zildjian or if it’s just a coincidence. Your thoughts?

END_OF_DOCUMENT_TOKEN_TO_BE_REPLACED

Looks like ZIldjian has expanded their new A Custom Rezo line at NAMM this year with seven new models. I personally haven’t tried these out, but I’m very interested to hear how the blended lathing sounds.

END_OF_DOCUMENT_TOKEN_TO_BE_REPLACED

To celebrate its 385th anniversary [ed: WOW!], Zildjian announced details of the Zildjian Drummers Achievement Awards which will take place for the first time in the UK at London’s Shepherds Bush Empire on Sunday 7 December 2008. Honoured at the awards ceremony will be drumming legend Ginger Baker. The event will be very much a performance led night with Ginger Baker joined onstage by Cream sidekick Jack Bruce and African legend Tony Allen. Also in attendance will be some of the world’s greatest drummers including Simon Phillips, Steve White and Keith Carlock laying down a night of rock n roll beats and unforgettable riffs. More special guests are to be announced in the coming weeks and tickets will be made available to the public.

Zildjian’s Pitch Black series is the latest addition to their sheet bronze collection. Falling above the recently released ZHT series, Pitch Black is made of B-12 alloy and designed to be played loud. From Zildjian’s website:

The formidable sound and look of Rock at its absolute best. Pitch Blackâ„¢ cymbals were specifically designed to be coated and played loud… We then developed a proprietary coating process which allows the cymbal to be durable and strikingly beautiful yet still open up like a cymbal should. Eight new models unlike anything you or your fans have ever heard or seen before. The only way we could make these any more Rock would be to put leather pants on them.

END_OF_DOCUMENT_TOKEN_TO_BE_REPLACED

Today we kick off Season 4 of Drummer Talk with a show about kit maintenance.  Dave Weckl is the drummer of the week, the pataflafla is the rudiment of the week, and Carter reviews Zildjian’s new Pitch Black cymbals.  Show Notes

I have to give my family credit for putting up with the racket, because as some of you may know, its not the easiest thing in the world to live with a kid who's trying to become a rock and roll drummer.
Mac Weinberg